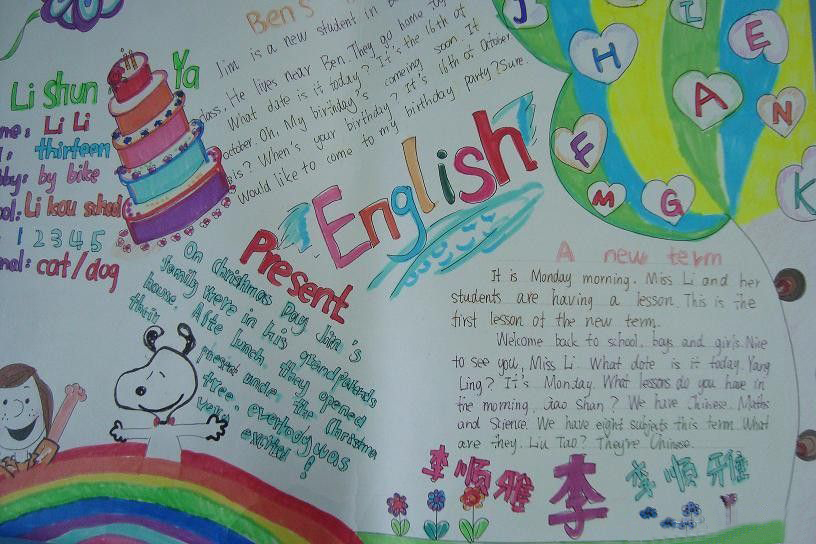 On New Year’s Eve, our class had a party. The atmosphere was good. It was out of the ordinary from the very begining. The boy student from one bedroom gave an unusual performance. We saw a boy named Li Xinmin turn off all the lights in a sudden snap. Then with three resounding crow of a cock echoing in the hall, the hall was again brightly lit in a snap.

Then, the representative of the bedroom Zhu Guozhang asked us to guess a line of a poem related to the above situation. He added that Li Xinmin alone was born in the year of the dog and the other three were all born in the year of the chicken. They left us all in confusion. And it was our monitor who was quickwitted. He shouted our, "The day breaks as the cock crows three times at dawn." The hall After that, they had another item. This time Li Xinmin was placed in the middle of the circle. While he was standing there, the other three stood around him, each bowing down to him at an angle of 120 degrees. It was an idiom. This time I got it right:"The dog stands out among a group of chickens."

Then we all sang and played games until it was eleven o’clock at night. The old man on night watch came to turn off the lights. We had to tear ourselves away from the party.

From this activity, I discovered that many of our classmates are really talented singers.

New Year's Day is one of important days for many people in the word during the year.Most people spend the New Year'sDay in hotels.January 1st is considered as the New Year's Day.most companies,shops,school,and government offices are closed during that time.People prepare for New Year's Dayfrom late December.Firt,people spend a few days to clean their houses completely.Some families then put up some new painting from November to be sent in January.The New Year's meal is also prepared from the end of December.During the New Year's Day,people usually do not cook and relax at home. On New Year's Eve,it is common to have a bag dinner with family members or friends at home or in hotels and hear bells which informs us of the coming New Year.On New Year's Day,people fiest greet each other. Some people wear new coats and visit temples to pray for happiness and health theoughout the New Year.Children are busy with getting the gifts from their parents and relatives.

There is a park near my home.There are a lot of beautiful trees,flowers and birds in the park.So many people go to the park to enjoy their weekends.They like walking or having a picnic in the park.But I like flying a kite with my sisiter there.
我家附近有一个公园。哪里有很多美丽的树、花和小鸟。所以很多人都喜欢到那里去度周末。他们喜欢在公园里散步或是野餐.但是我喜欢和我姐姐在那里放风筝。

I have a small bedroom. There are only a small bed, a small desk and a small chair in the room. And there is a beautiful doll on my blue bed. Everyday I do my homework, read books and play games with the doll in my bedroom. It is small, but it gives me much happiness.
我有一间小小的卧室。那里有一张小小的床、小小桌子和一把小小的椅子。而且还有一个漂亮的娃娃在我那张蓝色的小床上。我每天都在房间里写作业，看书和与我的娃娃玩。虽然房间很小，但是他给了我很多欢乐。

My father is a tall and handsome man. He is a policeman. Everyday he comes back home very late, because he must help the others. He doesn't have time to examine my homework and take me to the park. But I like my father, because he is a good policeman.
我的爸爸是一个高大帅气的男人。他是一个警察。他每天都很晚才回家，因为他要帮助其他的人。他没有时间给我检查作业和带我去公园。但是我仍然很喜欢我的爸爸，因为他是一个好警察。

A Fox, just at the time of the vintage, stole into a vine-yard where the ripe sunny Grapes were trellised up on high in most tempting show. He made many a spring and a jump after the luscious prize, but, failing in all his attempts, he muttered as he retreated："Well what does it matter! The Grapes are sour!"
译文： 正当葡萄熟了的时候，一只狐狸偷偷地溜进了葡萄园。葡萄架上高高地挂着亮晶晶的、熟透了的葡萄，显得十分诱人。他跳了好几跳，蹦了好几蹦，想吃到这甘美的葡萄，但是他的企图全落空了，走开的时候，他自言自语说："得了！这有什么！这葡萄是酸的。"

in most tempting show 最诱人的样子

An apple a day keeps the doctor away. 一天一苹果，不用请医生。

An eye for an eye and a tooth for a tooth. 以眼还眼，以牙还牙。

An hour in the morning is worth two in the evening. 一日之计在于晨。

An ounce of luck is better than a pound of wisdom. 聪明才智，不如运气。

An ounce of prevention is worth a pound of cure. 预防为主，治疗为辅。

As a man sows, so he shall reap. 种瓜得瓜，种豆得豆。

A single flower does not make a spring. 一花独放不是春，百花齐放春满园。

A sound mind in a sound body. 健全的精神寓于健康的身体