A
Every August, Edinburgh, the capital of Scotland, is the home of one of the most important arts festivals in the world. Three of our young readers went there and told us about it.
her often disagree 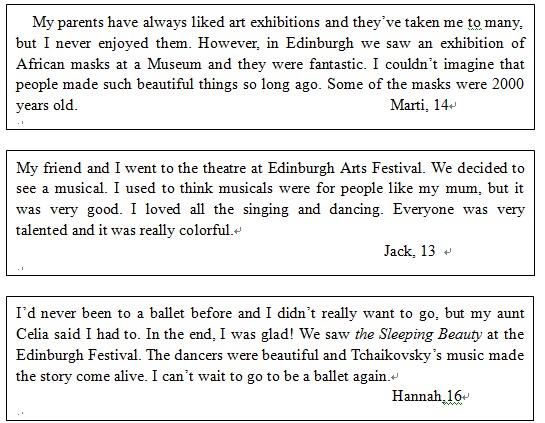 26. Who went to the arts festival alone?

A. They all expected that they would have a great time before they went.

B. They all thought the festival would be rather boring before they went.

C. They were all music lovers and enjoyed singing and dancing a lot.

D. they were under 18 so they had to go to the festival with adults.

Martin had just finished high school. He would go to college at the far end of the city. He didn’t want to live there, and he didn’t want to take the bus either. So his father agreed to buy him a car.

His father spent all his summer teaching him how to drive, from the ABC to the XYZ. Thinking of the great feeling of driving a new car, Martin learned very quickly, and received his driver’s license just before his eighteenth birthday.

The second day, all the family, and their dog, went to a car shop. Martin spent almost all the morning going from one car to another. Finally he saw a red Blue Bird. He had a testing drive on the open ground, and called out, “This is what I want, Dad!” when everything was done, they were ready to leave.

His dad immediately took the back seat, right behind the new driver. Martin wondered why his father chose that seat, for his father always enjoyed looking in front.

So he said, smiling, “I’m sure you’re back there to have a change after all those weeks of sitting in the front seat teaching me how to drive.”

“No,” Dad replied, “Do you remember what you did to me all those years when I took you to and from school? I am sitting here to hit and kick the back of your seat all the way !”

28. Which of the following is NOT the reason why Martin’s father agreed to buy him a car?

A. Martin would go to college and it was far from home.

B. Martin preferred living at home to living at college.

D. Martin was able to learn how to drive very quickly.

29. In which order did Martin do the following things?

a. He finished his high school b. He tested driving the new car.

c. He got his driver’s license d. He decided to buy the Blue Bird.

e. He kicked the front seat while his father was driving.

30. How would the whole family probably feel on their way home?

Space travel is nothing new. The first spacecraft with a human was sent up into space in 1961. Since then, people have not only traveled to space, but many of them have also lived there in space stations for sometime.

The Soviet Union sent the first space station into space in 1971. this space station was called Salyut 1. Salyut 1 was designed as a place where people could live while they observed space and did experiment. The first group of astronauts lived there for 23 days. The Soviet Union went on to make seven more Salyut space stations. At about the same time, the United Stations built its own space station, called Skylab.

Astronauts visited and often lived in these space stations for a short time. However, it wasn’t until the late 1980s when the Soviet Union sent the Mir space station that people began to live in space for a longer time. Mir stayed in space from 1989 until 2001, when it was decided that the space station was too old and no longer safe to live in.

Living in space stations seems to be fun, but astronauts face many problems. One of them is food. All the meals on space stations are put together on Earth and sent there by space shuttle. Because the food has to last a long time (sometimes up to three months), a lot of it has to be stored in cans. The space station does not have a fridge, but it has a cool room to keep fruit and vegetables fresh. Astronauts also eat many other foods such as dried meat that o not need special care.

Without the help of gravity, sitting down to eat can be tough. Astronauts sometimes have to fix themselves to the wall while eating. They also have to be very careful so that food does not float away.

31. Which of the following has the closest meaning to the underlined word “observed” in Paragraph 2?

A. Astronauts can never have a chance to eat fresh food when they live in space stations.

C. Astronauts could live in the Mir space station for no more than three weeks.

D. Space travel has quite a long history of more than 60 years.

33. What is the best title of this passage?

During the 1800s, African Americans worked long days in the fields of the American South. They sang songs that they had brought from Africa while working. One person sang a line. Then a group of workers repeated it. The song’s words told of the hardships(艰辛) that people suffered. They clapped their hands and stamped(跺脚) their feet to the music.

In the 1860s, the music changed greatly. African American music took new forms. It was also influenced by dance music, which had great rhythm(节奏). Banjos(班卓琴) became popular. A blues singer usually sang a line and then played the Banjo in reply. By the early 1900a, the guitar had taken the place of Banjo in the blues music.

The blues music has many obvious characteristics. One of them is that the musical notes(音调) are often “bent”. That is, they are changed slightly to give a song more strength.

Lyrics are the words of a song. Blues lyrics describe everyday life. The lyrics are often about the relationships between men and women. They tell about finding and losing love, having money or being poor, being happy or sad or lonely. They almost always use the rhythms of everyday speech. A group of blues lyrics usually has three lines. The second line repeats the first line. The third line has different words.

By the 1940s, large numbers of African Americans moved to Chicago. There, a new kind of “Chicago” blues began. The new music was excellent dance music. Chicago blues led to the birth of a new music style—rock and roll.

35.What information does the passage NOT provide?

A. How the blues music developed as time went by.

B. What the blues lyrics are mostly about.

D. Hoe long the Banjo was popular in the blues history.

36. Which of the following is most likely taken from a blues song?

D. I’ll die if you don’t help me. You have to help me. Please help me.

37. What fact does the passage lead you to believe?

A. African Americans sang songs after a long day’s work to relax in the 1800s.

B. The blues singers in the 1860s usually played the guitar while singing songs.

C. It is not difficult to tell the blues music from others from its musical notes.

D. Rock and roll was the most popular blues music in Chicago in the 1950s.